Introduction:
In this article I would like to address the role that Network Packet Brokers play in enabling effective monitoring for encapsulated traffic on the network. This article will be divided into two portions because, at least in my view, the topic can be divided into two problem areas: the traditional problem, that users have been dealing with for some time, and a new set of issues that have cropped up with the rise of distributed compute infrastructures, data centers, and virtualization. Before delving into the issues of monitoring encapsulated traffic let’s talk about what it is.
Encapsulation, tagging, or labeling network traffic is a necessity in all but the simplest of modern networks. Whether it is simply VLAN tagging to isolate broadcast domains, building complex overlay networks, or segmenting virtual traffic. These processes involve adding additional information to network traffic headers (known as tagging or labeling) or taking an entire frame and placing it inside some other transport protocol (encapsulation, tunneling) all for the benefits of reduced latency, secure routing, and network efficiency. Once the encapsulated or tagged packet reaches its intended destination, the tag/label is removed or, in the case of a tunnel endpoint, the tunnel is terminated (the traffic is decapsulated) and the packet continues to its ultimate destination. 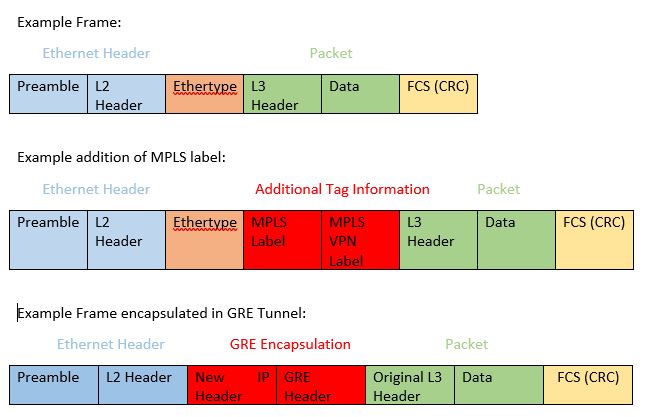