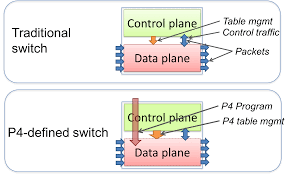 Today, enterprises and carriers with large, complex networks often find it challenging to manage their networks to minimize outages and performance issues. To combat that, they seek visibility solutions that can help them understand what is happening in their networks. In a time where network issues are becoming complex, L4 network visibility is not enough for some organisations to get a complete insight into what is happening in a network. Traditional network packet brokers are built on ASICs. Unlike fixed-function ASICs, P4 is an open source programming language that allows full forwarding-plane programmability. P4 is a high-level programming language intended to describe the behaviour of the data plane of any appliance that forwards, modifies or inspects network traffic.

The main purpose of P4 is to provide network engineers and operators with the ability to control packet processing at the chip level and develop their own features. Most network data planes perform three basic operations: packet parsing, match/action operations, and packet reassembly. P4 provides coding constructs that make describing these operations easy to understand. And because P4 is an actual language, users can define the packet header structures the parser will extract. This is a vast improvement over protocols like OpenFlow which can only parse the headers for supported network protocols.

Remove unused protocols: Unused protocols can be removed, freeing up space for it to focus solely on what the user wants it to do.

Greater visibility: P4 allows users to program in rules to forwarding devices. It can, for example, create a tag for each packet as it passes through a router or switch. This gives network engineers higher level of visibility into the routing paths of packets to determine network latency.

Cubro’s Sessionmasters EXA32100 and EXA48600 are the first NPBs in the market with P4 support. P4 is a language for silicons. With the help of P4 it is possible to add functions to a silicon, which is impossible in an ASIC. This results in higher performance compared to FPGA. To give an example, we add some extended MPLS features to the unit to support the following MPLS removing actions:

This is one simple example for P4 (see Figure 1) and this feature is relevant not only for monitoring but also for SDN and any kind of traffic engineering in advanced networks.

These advanced network packet brokers allow the network engineers to program the chips that run their networking equipment. They are free to do what they want with their networking gear and eventually it is more cost effective because it allows users with enough scale to buy component parts directly from original manufactures, without going through a third-party.

The G5 platform of Cubro network packet brokers supports user-definable match keys and actions. This provides a major advantage for future expansion. In case of a request for a new feature, P4 allows us to add new features within weeks which might not be possible with ASIC. For example, removal of up to 4 MPLS tags in one action is not supported in any ASIC switch.

Bringing new technology to the market is crucial in the dynamic networking environment. For carriers, data centres, defence organisations and all enterprises who want to secure and manage the growing network traffic by having complete network visibility, Cubro Network Visibility offers solutions that deliver high ROI, cutting-edge features, and exceptional reliability. Unlike other providers that burden customers with annual port and software licensing fees, we provide a single, unified visibility solution with the full feature set for no additional cost. Our customers experience the full value of network visibility providing them with the insights they need to be confident about their network architecture and performance. Our network visibility products offer reliable and scalable solutions through applications like monitoring, filtering, aggregation, and metadata extraction which result in improved network performance.